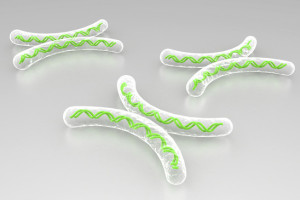 NAHR as a cause of PTLS

PTLS is caused in about 60% of cases by a microduplication in the chromosomomal region 17p11.2. Such microduplication is caused in about 70% of cases by Non Allelic Homologous Recombination (NAHR) between low-copy repeats (LCRs) and is reciprocal to the common recurrent 3.7-Mb microdeletion that causes Smith-Magenis syndrome (SMS), a syndrome which shows overlapping clinical features, though being generally more severe than PTLS. In all cases of PTLS the microduplication appears to contain at least the RAI1 gene, suggesting that this gene is mainly responsible for the phenotype (SMS is caused also by single nonsense or frame-shift mutations of the RAI1 gene, confirming that this is a highly dosage-sensitive gene).

All reported cases oF PTLS have occurred sporadically without differences in the parental origin of rearrangements. PTLS is typically diagnosed by array comparative genomic hybridization (CGH) analysis (but also MLPA kits are available to measure the dosage of RAI1). High-throughput technologies like exome sequencing powered with CNVs detection probes and algorithms may also be used to screen for PTLS. High-throughput technologies offer the advantage to screen for other chromosomal imbalances or genic mutations in case the screening of the PTLS critical region is negative.