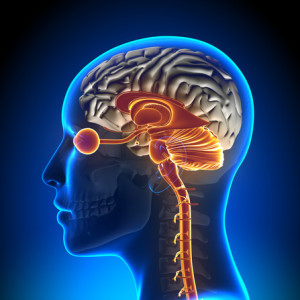 Oculomotor apraxia (OMA)  is the absence of,  or a defect in,  the control of voluntary purposeful eye movement.  Children with this condition have difficulty moving their eyes horizontally. Because of this, most patients  with OMA have to turn their head in order to follow objects in side gaze. They must utilize a head thrust to compensate for this inability to initiate horizontal eye movements away from the straight-ahead gaze position. Typically, vertical eye movements are unaffected.

The etiology of OMA is usually not determined and considered idiopathic. However, the condition is sometimes considered secondary and attributed to insults occurring either during the perinatal period or the first 6 months of life. Associations may include perinatal hypoxia, meningitis, periventricular leukomalacia, cerebral palsy, septicemia, anemia, herpes encephalitis, and seizure disorder.

Differently from idiopathic OMA, AOA is characterized by impairment of both horizontal and vertical eye movements. Although some AOA1 patients may show mild cognitive problems, such as difficulty in concentration and multi-step activities, intellectual inability isn’t usually a characteristic of these patients. AOA2 patients may show weaker coordination of some complex cognitive functions such as working memory, speech, and learning. AOA2 patients may have mild cognitive impairment as indexed by the Mini-Mental State Examination (MMSE) and the Mattis Dementia Rating Scale.

Onset may be in childhood (AOA1) or delayed in the second decade (AOA2) with loss of independent walking due to incoordination and weakness. Sensorimotor axonal polyneuropathy may appear and be confirmed by EMG. MRI may show cerebellar atrophy, mild brainstem atrophy, and cortical atrophy in advanced cases of AOA1, cerebellar atrophy, loss of Purkinje cells, and demyelination in AOA2.

Hypoalbuminemia and hypercholesterolemia are found in AOA1, whereas elevated levels of alpha-fetoprotein (AFP) and protein creatine phosphokinase (CPK) may be found in AOA2.