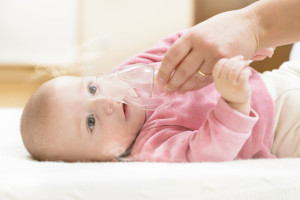 Congenital central hypoventilation syndrome (CCHS, also known as congenital Ondine curse, from the myth of Ondine, who was cursed to think consciously of breathing even in sleep) is a rare congenital genetic disease caused by mutation in one of different genes: primarily PHOX2B, but also RET, GDNF, EDN3, BDNF, and ASCL1. The disease can be isolated or syndromic, typically associating with neurocristopathies such as Hirschsprung’s disease (Haddad syndrome, appearing in about 16% of all patients with congenital central hypoventilation syndrome), ganglioneuroma and neuroblastoma. From birth, the life of CCHS patients depends on ventilatory support during sleep, involving a high burden of care. However, despite the physical constraints imposed by CCHS and its anxiogenic nature, this disease is associated with an impairment of health-related quality of life in young adults that remains moderate, which conveys hope to parents of a child diagnosed with CCHS, and for patients themselves.

CCHS is combines respiratory hypoventilation with symptoms of autonomic dysregulation. The generation of respiratory impulses is impaired and the disease is characterized by abnormal control of respiration in the absence of other disease or identifiable brainstem lesions. Patients breathe normally while awake, but hypoventilate with normal respiratory rates and shallow breathing during sleep retaining carbon dioxide  and so developing hypercapnia. More severely affected patients hypoventilate both awake and asleep. These patients typically present in the first hours of life with cyanosis and increased carbon dioxide during sleep. A deficiency in autonomic control of respiration results in inadequate or negligible ventilatory and arousal responses to hypercapnia and hypoxemia.

Seizures and failure to thrive have been described in CCHS patients. Recent findings suggest that the psychological development of CCHS patients is influenced by hypoxia. Deficient cognitive skills can be found in preschoolers and school-age patients.

Recent evidence suggests that the principal central respiratory chemoreceptors are located within the retrotrapezoid nucleus (RTN) and it has been postulated that the absence of RTN neurons may underly  the sleep apnea and lack of chemoreflex that characterize CCHS. The nucleus/tractus solitarius is the principal brainstem respiratory center and authors postulated that delayed synaptogenesis or myelination in the nucleus solitarius may play a role in neonatal hypoventilation, especially in preterm infants and in some sudden infant death syndrome cases.

Management of patients requires both medical and dental expertise to achieve a successful outcome. The use of basic behaviour management techniques in conjunction with monitoring the patient’s vital signs may lead to a successful outcome and an improvement in the behaviour of the patient. Neurodevelopmental monitoring and intervention from early infancy is essential.  Some issues need to be considered in planning long-haul flight as problems such respiratory symptoms and desaturations that may arise during the flight. Long-haul air travel is possible for children with respiratory compromise, but anticipatory preparation should be timely arranged.

The use of phrenic or vagal nerve stimulation to restore spontaneous breathing in patients with congenital central hypoventilation syndrome has been reported.