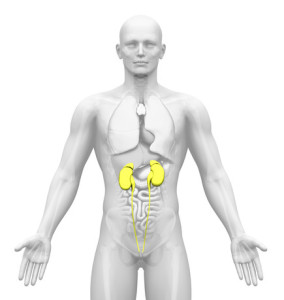 Alport syndrome is a hereditary progressive glomerulopathy characterized by hematuria and proteinuria. The disease is caused by a gene mutation and affects the production of collagen type IV, which is an abundant component of the glomerular basement membrane.

Alport syndrome can be divided into three forms, depending on different inheritance: X-linked Alport syndrome (XLAS), autosomal recessive Alport syndrome (ARAS) and autosomal dominant Alport syndrome (ADAS). XLAS is the most frequent form (about 80% of total cases), can affect both hemizygous males or heterozygous females, but generally males have a more severe phenotype. ARAS and ADAS are less frequent and affect males and females with the same severity.

The diagnosis relies on clinical findings such as microhematuria combined with renal biopsy showing a thinning/thickening of the glomerular basement membrane with a longitudinal splitting of the lamina densa, and genetic testing.

However, Alport syndrome has recently shown to be more clinically variable than expected. Therefore, it is advised to perform genetic testing also whenever histopathological analysis is not in favor of Alport syndrome diagnosis, since patients may present with multiple episodes of isolated macroscopic hematuria and normal electron microscopy analysis of the glomerular basement membrane.

The disease may also begin with proteinuria, progressive renal failure and haemolysis, but without overt haematuria or hearing loss.

*Thin basement membrane nephropathy (TBMN) is characterized by microscopic hematuria, is largely asymptomatic, and is rarely associated with proteinuria and end-stage renal disease.

No treatment is available today and therapies are directed toward specific symptoms. For instance, in patients with high level of proteinuria, some clinical studies have demonstrated the efficacy of ACE inhibitors in reducing proteinuria and slowing the progression to end-stage renal disease. Recently, other drugs are under phase II or phase III clinical trials such as Bardoxolone methyl, which increases the glomerular filtration rate but which safety is under evaluation.

Among the most advanced therapies being tested, there is exon skipping therapy which consists of the use of antisense oligonucleotides to “transform” a nonsense mutation into an in-frame deletion that leads to a milder phenotype. This system is being tested in mice animal models, where the results obtained are promising, but for which numerous studies are still required. Moreover, promising experiments in mice have been done with chorionic stem cells (CSC). When transplanted into Alport mice, a single intraperitoneal injection of CSC significantly lowered blood urea and urine proteinuria levels and nearly two thirds of transplanted mice maintained their weight above the 80% welfare threshold, indicating that indicate that CSC may be used to delay progression of renal pathology via a combination of anti-inflammatory effects and potentially replacement of the defective resident podocytes.

The differential diagnosis of Alport syndrome includes Fechtner/Epstein syndrome, characterized by the association of hereditary nephritis, sensorineural deafness, cataracts, and the triad of the May-Hegglin anomaly (thrombocytopenia, large platelets, and characteristic leukocyte inclusions – “Döhle-like” bodies). Fechtner/Epstein syndrome is caused by mutation in MYH9. Overall, it should be remembered that the most common causes of isolated microscopic haematuria among children and young adults are IgA nephropathy, Alport syndrome, and thin basement membrane nephropathy (TBMN). In atypical cases the initial diagnosis may be chronic thrombotic microangiopathy, but negative testing of candidate genes for steroid-resistant nephrotic syndrome and congenital thrombotic microangiopathy help in the differential diagnosis.