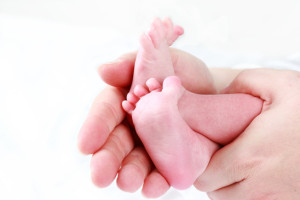 Arthrogryposis Multiplex Congenita (AMC) is a clinically and genetically heterogeneous condition characterized by multiple joint contractures at birth. The condition is generally defined by the presence of congenital joint contractures in two or more body areas, usually associated with hypoplastic muscles. Sometimes the term arthrogryposis multiplex is used to identify a clinical sign rather than a specific disease. When referring to arthrogryposis multiplex as disease, a commonly used name is distal arthrogryposis (DA). Amyoplasia (A = no; myo = muscle; plasia = growth) is a distinct form of arthrogryposis which shows characteristic clinical features. Amyoplasia is sporadic, whether distal arthrogryposes are autosomal dominant. Lethal fetal akinesia deformation sequence (FADS) describes a clinically and genetically heterogeneous phenotype that includes fetal akinesia, intrauterine growth retardation, arthrogryposis and developmental anomalies (affected babies die as a result of pulmonary hypoplasia).

Distal arthrogryposis (DA) syndromes are often hereditary, and joint involvement is predominantly in the hands and feet. Muscle weakness is present in about half of the patients. Hands show characteristic medially overlapping fingers, clenched fists, ulnar deviation of fingers, and camptodactyly, and the feet have deformities. Contractures at other joints are variable. Other visceral anomalies are absent and intelligence is normal. The prototypic distal arthrogryposis is type 1 (DA1 – TPM2 gene mutation), which is characterized largely by camptodactyly and clubfoot. Hypoplasia and/or absence of some interphalangeal creases is common. The shoulders and hips are less frequently affected. While the pattern of affected joints is consistent, the degree to which the joints are affected is highly variable, with equinovarus deformities ranging from mild to severe and hand involvement ranging from isolated hypoplasia of the distal interphalangeal crease of the fifth digit to severely clenched fists and ulnar deviation of the wrist. Muscle strength is usually found to be more important than joint range of motion (ROM) for motor function. The various phenotypic forms of distal arthrogryposis are classified hierarchically according to the proportion of features they share with one another and are designated DA1 through DA10.

To see each and every distal arthrogryposis type, you can click on any of the buttons below:

Pathogenic mutations can be found either in the “classic” arthrogryposis congenital multipla genes (ADCY6, TPM2, MYBPC1, MYH3, TNNT3, TNNI2, MYH8, FBN2, PIEZO2, ECEL1) and in genes associated with conditions which also include arthrogryposis as part of the clinical spectrum (the so-called neuromuscular genes): CHRND, CHNRG, ECEL1, GBE1, MTM1, MYH3, NEB and RYR1. Whole exome sequencing has recently identified likely pathogenic mutations also in the FBN3, MYO9A, and PSD3 genes as well as a second locus with either homozygous or compound heterozygous variants in a candidate genes like MYBPC2 and VPS8.

In patients with arthrogryposis and neurodevelopmental impairment, de novo heterozygous mutations have been identified also in the NALCN gene and in the MYOD1 gene. Additional pathogenic mutations have been detected in the GPR126, KLHL40, KLHL41 and SPEG genes.

Homozyogous mutations in the VIPAS39 gene have been detected as the cause of ARC syndrome.

In any case, it is important to highlight that although numerous causative genes have been identified for each of these disease groups, in many cases a specific genetic diagnosis remains elusive, even after whole exome sequencing.

Arthrogryposis can be suspected in utero from absent fetal movements. Fetal akinesia deformation sequence presents with heterogeneous sonographic findings, mostly affecting the profile, elbow-, knee-, ankle joint, wrists and fingers; in most of cases of sporadic nature. Whereas hydrops fetalis and nuchal edema were earlier signs, thorax hypoplasia, polyhydramnios and IUGR can be found later in pregnancy. Several cases of arthrogryposis congenita are due to a de novo mutation, with an empirical recurrence risk of 5% based on the possibility of parental germline mosaicism. In autosomal recessive and X-linked forms the recurrence risk can be up to 50%. If the disease-causing mutation in the family is know, early prenatal diagnosis through molecular genetic testing is possible.

The clinical approach to the treatment of arthrogryposis multipla congenta is multidisciplinary. In general attention should be directed at the development of muscle strength with early stimulation of active movements. Immobilization should be minimized. The Ponseti method is an effective first-line treatment for arthrogrypotic clubfeet to achieve functional plantigrade feet. Children will often require more casts and have a higher risk of relapse. Older patients with arthrogryposis multipla congenital may also benefit from total hip replacement surgery, particularly to treat osteoarthritic hip pain. A congenital anomaly of the thumb, where the metacarpophalangeal joint undergoes radial deviation to compensate for a narrow first web space, is frequent in arthrogryposis patients. Usually the bilateral cases tended to show better rehabilitative improvement compared with the unilateral ones, probably because the latter patients could use their unaffected hand.

Overall patients show less hip extension than the control population. However, with adequate orthotic support, children with AMC and even with severe weakness and contractures can achieve walking. Greater movements in the trunk and pelvis during walking have been observed in children with AMC using orthoses compared to those wearing only shoes.

To test for arthrogryposis multiplex congenita Breda Genetics recommends the following panel based on exome or full genome sequencing:

If negative: UPGRADE TO FULL: analysis of variants of all other genes as obtained from exome or full genome sequencing.

Alternatively: EXOME TRIO: clinical exome sequencing in the patient, the mother and the father to boost the identification of novel mutations, which are typical in several forms of arthrogryposis.