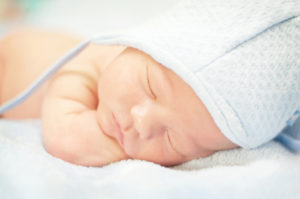 DA2B is thought to be the most common of the distal arthrogryposis disorders. Distal arthrogryposis is a clinically and genetically heterogeneous disorder characterized by clenched fist, overlapping fingers, camptodactyly, ulnar deviation, and positional foot deformities from birth. If distal arthrogryposis type 1 (DA1) is not associated with other abnormalities, other forms of DA such as DA type2 have additional phenotypic features. DA2A is called Freeman-Sheldon syndrome (FSS), whereas DA2B is called Sheldon-Hall syndrome (SHS). Contractures in DA2B are similar to those observed in DA1, but affected individuals tend to have more prominent nasolabial folds, downslanting palpebral fissures, and a small mouth (small mouth is also distinctive of DA2A – whistling face syndrome).

Although the small mouth is typical of both DA2A and DA2B, the shape of the mouth and chin can be different in DA2B and feeding difficulties at birth or the need surgical revision may be absent. Mildly increased serum creatine kinase without clinical muscle weakness has been documented. However, muscle weakness can be seen. Facial involvement may be mild or absent in some cases.

Targeted mutation analysis can be done to detect known disease-causing mutations in in the MYH3, TNNT3, TNNI2 or TPM2 gene. However, since arthrogryposes are clinically heterogeneous and consistent clinical overlap can be seen among different subtypes, panel testing (EXOME PANEL) is recommended.