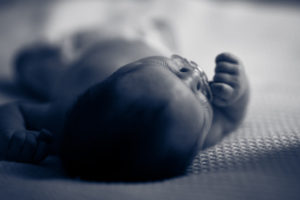 DA2A is phenotypically similar to DA1, but, in addition to contractures of the hands and feet, it is characterized by oropharyngeal abnormalities, scoliosis, and a distinctive face that includes a very small oral orifice (often only a few millimeters in diameter at birth), puckered lips, and an H-shaped dimple of the chin; hence, DA2A has been called whistling face syndrome. Facial features are typical of DA2A and are used to make the differential diagnosis with DA1.

In cases with profound neurological involvement, which are thought to be more often autosomal recessive and likely due to mutations in as yet unknown genes, MRI scan can show generalized cerebral, cerebellar, and brainstem atrophy. Bilateral juvenile glaucoma has been reported in one case. Malignant hyperthermia and hyperpyrexia can arise in some as anesthetic and/or surgical complications.

The syndrome has been reported in multigenerational families, also with reduced penetrance.

Cases with whistling face without limb involvement have been described.

DA2A is caused by mutations in the MYH3 gene. Mutations so far reported include the two mutations in exon 17, c.2084G>A (p.Arg672His) and c.2083C>T (p.Arg672Cys), the latter impairing cross-bridge detachment and cycling in adult skeletal muscle, c.602C>T (p. Thr178Ile) in exon 5, and two mutations in exon 21, c.2543T>A (Val825Asp) and c.2590_2592delCTC. Germline mosaicism for MYH3 mutations has been proved. The transmission of MYH3-related Freeman-Sheldon syndrome is autosomal dominant, although some authors invoke the possibility of autosomal recessive inheritance likely due to mutations in as yet unknown genes, especially when severe neurologic involvement is diagnosed (see also OMIM 277720).