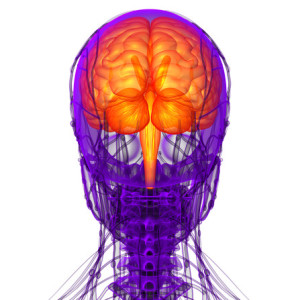 Glioma is the most frequent tumor of the central nervous system in adults.

Mutations in IDH genes (IDH1 and IHD2) can be found in more than 70% of low-grade gliomas and in some instances of glioblastoma. As the most frequent mutation, IDH1 Arg132His (also known as R132H) has been served as a predictive marker of glioma patients. The mutation at codon 132 of the IDH1 gene is also very frequent in grade II and III astrocytomas and oligodendrogliomas and in glioblastomas that develop from these lower-grade lesions. Codon 132 may be changed from Arg to His and more rarely from Arg to Ser. Tumors without mutations in IDH1 often show mutations affecting the analogous amino acid (Arg172) of the IDH2 gene.

Tumors with IDH1 or IDH2 mutations have particular genetic and clinical characteristics, and patients with such tumors tend to have a better outcome than those with wildtype IDH genes. However, the situation might be a more complicated since in recent studies a subtype of IDH mutant glioma has been associated with DNA demethylation and poor outcome, whereas a group of IDH-wild-type diffuse glioma showed molecular similarity to pilocytic astrocytoma and relatively favorable survival.

First-generation inhibitors of mutant IDH have entered clinical trials and have shown encouraging results in patients with IDH2 mutant acute myeloid leukemia (apart from gliomas, IDH1 and IDH2 mutations have been found in a variety of other human cancers, including acute myeloid leukemia, intrahepatic cholangiocarcinoma, and chondrosarcoma).

Because mutations in the IDH1 and IDH2 genes result in marked accumulation of the metabolic by-product 2-hydroxyglutarate (2-HG) within tumors and in urine, it has been proposed that 2-Hydroxyglutarate may serve as a useful, noninvasive biomarker to stratify patients newly diagnosed with glioma with regard to prognosis and management.

Another common genetic marker for gliomas if 1p/19q co-deletion. Gliomas with 1p/19q loss of heterozygosity (LOH) are known to be associated with longer patient survival and higher sensitivity to treatment than tumors without 1p/19q LOH. It has been recently found that calcification on CT is a simple and valuable preoperative indicator of 1p/19q LOH in supratentorial brain tumors that are suspected to be grade II and III gliomas.

All around the world several clinical trials on gliomas are ongoing. Some even involve nanotechnologies to tackle the drug delivery issues. The complete list is available here.