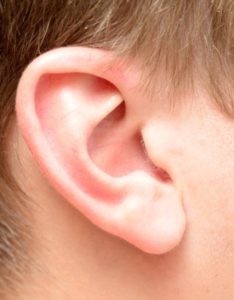 Hereditary hearing loss and deafness may be conductive, sensorineural, or a combination of both; syndromic (associated with malformations of the external ear or other organs or with medical problems involving other organ systems), or nonsyndromic (no other visible abnormalities of the external ear or any related medical problem); and prelingual (before language develops) or postlingual (after language development). Molecular genetic testing plays a prominent role in diagnosis and genetic counseling.

Based on pathogenesis, there are four types of hearing loss:

Terminology: “hearing impairment” and “hearing loss” are often used interchangeably by healthcare professionals to refer generically to a decrease in hearing capabilities, whereas “deafness” is a term that usually implies hearing thresholds in the severe-to-profound range by audiometry.

Autosomal recessively inherited hearing loss is severe to profound and almost invariably prelingual (with the exception of DFNB8 and some instances of DFNB2 and DFNB4, which are post-lingual). Most autosomal dominant loci cause postlingual hearing impairment, with some exceptions such as DFNA3, DFNA8, DFNA12, and DFNA19. X-linked nonsyndromic hearing loss can be either pre- or postlingual or mixed (DFNX3, for instance, is a mixed form).

Congenital hearing impairment is the most common birth defect in developed countries, affecting nearly 1 in every 1000 live births. Congenital hearing loss is therefore a condition that greatly impacts global health.

More than 50% of prelingual deafness is genetic. The carrier rate of the most common form of genetic hearing loss in the general population (DFNB1, caused by GJB2 mutations) is approximately 1 in 33.

DFNB is caused in most cases by a mutation in the GJB2 gene, which codes for a protein called connexin 26. GJB2-related hearing loss has been designated as DFNB1 and represent 50% of all cases of nonsyndromic autosomal recessive hearing loss. DFNB1 can be either bilateral or unilateral. c.35delG is the most frequent GJB2 mutation. Of note, there’s some debate about the molecular etiology of nonsyndromic sensorineural hearing loss in subjects with only one detectable GJB2 mutation. A minority of such cases is explained by digenic etiology of GJB2 with GJB3 or GJB6. Digenic inheritance was hypothesizes also for GJB2 and MITF. However, is some patients the contribution of a single GJB2 mutation remains unclear.

Another relatively frequent recessive form is DFNB4 (also known as large vestibular aqueduct syndrome), which is caused by SLC26A4 gene mutations. The rest of the cases is caused by mutations in several other genes, which sometimes have been identified in just one family or two.

Variants in a subset of genes of the mitochondrial DNA (mtDNA), mainly MT-RNR1 and MT-TS1, cause nonsyndromic hearing loss by a currently unknown mechanism. In particular, mutations of the MT-RNR1 gene, which encodes for the mitochondrial 12S ribosomal RNA, have been found with a carrier frequency of up to 4%. Additional mtDNA genes involved in nonsyndromic hearing loss are MT-CO1, MT-TH, MT-ND1, and MT-TI.

In children with delayed speech development, the auditory system should be assessed. In the presence of normal audiometry associated with progressive loss of speech and temporal lobe seizures, the diagnosis of Landau-Kleffner syndrome (GRIN2A gene mutations) should be considered.

Acquired hearing loss in children commonly results from prenatal infections from “TORCH” organisms (i.e., toxoplasmosis, rubella, cytomegalic virus, and herpes), or postnatal infections, particularly bacterial meningitis caused by Neisseria meningitidis, Haemophilus influenzae, Streptococcus pneumoniae, or many other organisms. In developed countries congenital cytomegalovirus (CMV) infection is the most frequent non-genetic cause of hearing loss. Its overall birth prevalence is approximately 0.64%; 10% of this number have symptomatic CMV. Of asymptomatic cases, up to 4.4% develop unilateral or bilateral hearing lossbefore primary school, although there is marked ethnic variation.

Age-related and noise-induced hearing losses are the most frequent examples of complex ‘environmental-genetic’ hearing loss in adults.

Hereditary deafness is one of the most genetically heterogeneous conditions known to date. It has been estimated that at least 1% of human genes may be involved in the pathogenesis of some form of hereditary hearing loss. For several genetic subtypes of deafness the locus has been mapped on a defined chromosomal region, yet the gene remains unknown. In one study, about 15% of patients with non-syndromic hearing loss have been found to carry at least one copy number variation in a known deafness gene (mostly large deletions, but also gene conversions and large duplications).

Large deletions/duplications testing is available by sequencing, array-CGH (genome-wide), and by MLPA (for single genes or group of genes). Patients and professionals can send an inquiry to info@bredagenetics.com.