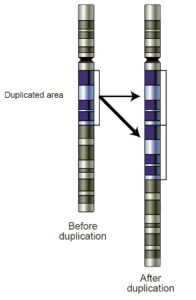 To further deepen the topic of CNVs formation: beyond evolution, we’ll now go into non-homologous recombination.

Other important mechanisms of non-homologous recombination are Non-Homologous End Joining (NHEJ), which is of the non-replicative type, and breakage-fusion-bridge cycle, which is triggered by the loss of telomeric regions.

Several CNVs are caused by transposons. Transposon are mobile elements which are able to relocate in different points along chromosomes. LINE1- or L1 – (Long Interspersed Nuclear Elements I) are the only transposons currently active in humans and they are crucial in the formation of CNVs, both in germline and somatic cells.

For references see the parent page of this chapter: