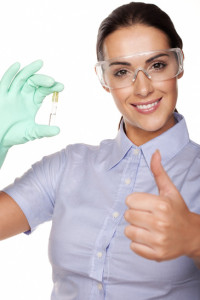 Molecular diagnostics at present can be subdivided in “whole” approach (Whole Exome or Whole Genome) and “targeted” approach (single gene or single panel testing). Methods for the detection of CNVs vary significantly on the desired type of approach. Here below a guide to the right choice (and the techniques we have chosen).

The microarray technology is based on the hybridization of target DNA segments with specific probes immobilized on a solid support. The hybridization event is registered by the emission of fluorescent light. array-CGH and SNP-array are the most common microarray technologies. Current ACMG guidelines recommend to perform CGH-array as first step in all cases of patients affected by mental retardation and complex congenital anomalies. However, microarrays cannot be of help in identifying balanced rearrangements or in locating the chromosomal position of multiplications (to this purpose it is necessary to perform FISH – see below).

NGS (Next Generation Sequencing) technology is based on the sequencing of highly fragmented DNA molecules. The DNA fragments can be sequenced several times each (coverage depth) producing several “reads”. The number of produced reads can be used to calculate the “dosage” of that particular DNA fragment and to detect if there is any CNV. Such calculations are made by sophisticated algorithms which compare the dosage of adjacent DNA fragments in the same sample or in a pool of control samples.

The “targeted” approach consist in the analysis of just one single gene or a group of genes (either when these genes are adjacent identifying a long chromosomal trait or when they are scattered across the genome).

FISH can be classified as a molecular cytogenetic technique. Probes marked with fluorochromes are matched with chromosomes on a plate to look if a certain chromosomal region is affected by any CNV or translocation. As such, FISH can easily identify if the target region is deleted, duplicated (or multiplicated in any number) and/or if it is translocated on another chromosomal position. FISH is simple, very intuitive and a very well validated technique with high levels of sensitivity and specificty, although it cannot detect small imbalances and cannot be used to scan the entire karyotype (it is necessary to know which chromosomal region one wants to test to look for the appropriate probe to use).

The qPCR (quantitative Polymerase Chain Reaction) is a long used technique to detect large deletions or duplications of a selected DNA trait. The qPCR enables the monitoring of the DNA amplification process at any stage of the reaction (and for this reason it is also called real-time PCR or rtPCR). The monitoring is possible thanks to the use of specific o aspecific fluorescent probes.

See also our page about the 10 most frequent questions and answers on MLPA. MLPA (Multiplex Ligation Probe Amplification) is probably the most used technique for the detection of large deletions/duplications of selected genes. Its popularity is due to its simplicity, fast execution, robustness and cost efficiency. MLPA is based on the hybridization of target DNA regions with complimentary probes, followed by a multiple PCR with a single pair of fluorescent primers. Relatives of the MLPA are:

MAPH (Multiplex Amplification and Probe Hybridization), where the DNA is immobilized on a membrane and hybridised with a series of targeted probes. The membrane is then washed away, the hybridised probes are amplified by PCR and the PCR products are then separated by electrophoresis.

MAQ (Multiplex Ampliccon Quantification), which is based on a multiple PCR producing fluorescent amplicons from the DNA region of interest and from DNA control regions. The PCR products need then to be separated on a capillary sequencer.

Born in the seventies, the southern blot (or southern blotting) is still in use for the detection of certain types of CNVs, in particular in the diagnosis of repeat expansion diseases to detect high or extremely high numbers of repeats. The target DNA is fragmented by the use of restriction endonucleases and its fragments are then separated by electrophoresis on a nylon or nitrocellulose membrane. Specific DNA probes are labelled by incorporating radioactivity or tagging the molecule with a fluorescent or chromogenic dye and are put together with the previously fragmented DNA. After hybridization, excess probe is washed from the membrane (typically using SSC buffer), and the pattern of hybridization is visualized on X-ray film by autoradiography in the case of a radioactive or fluorescent probe, or by development of colour on the membrane if a chromogenic detection method is used.

Produced and commercialized by Nanostring Technologies, this method is very flexible and can be used for both RNA and DNA analysis for expression studies and CNVs analysis respectively. It’s about a digital couting technology, very similar to RNA-seq or NGS. Each gene of interest is quantitated and linked to an optical barcode that works as unique identifier of that particular gene. The technology is based on the use of optical barcodes. The optical barcodes are then identified and counted using a flow cell technology on a specific instrument (nCounter).

Breda Genetics srl believe in the robustness and reproducibility of MLPA for targeted deletion/duplication testing for single genes and panels and in EXOME D or array-CGH for the whole genome approach.

For references see the parent page of this chapter: