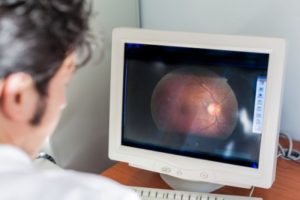 Stargardt disease is the most common form of inherited juvenile macular degeneration. Decreased central vision with decreased color perception is a hallmark of Stargardt disease, whereas side vision is usually preserved. The condition can be caused by mutations in one of 4 different genes, but significant overlap exists with some other genetically determined conditions.

The onset of Stargardt disease is typically in childhood or adolescence and the progression rate is quite variable. Eventually, almost everyone with Stargardt disease has a visual acuity in the range of 20/200 to 20/400. The vision loss is not correctable with prescription eyeglasses, contact lenses, or refractive surgery. Patients may exhibit color vision deficiencies. The degree and type of colour vision deficiency correlate better with best-corrected visual acuity (BCVA) than with full-field electroretinography (ffERG) results.

Yellowish flecks in and under the macula are typically observed at first ophthalmologic examination. Flecks are deposits of lipofuscin, a fatty byproduct of normal cell activity, which accumulates abnormally in Stargardt disease. A “beaten-metal” appearance in the fovea or parafoveal region is typical. The “dark choroid” sign on fundus fluorescein angiography in seen most cases.

In addition to genetic heterogeneity, Stargardt’s disease is characterized by a high degree of phenotypic heterogeneity even among individuals of the same family and/or with the same mutation. To explain the great phenotypic variability associated with ABCA4, a genotype-phenotype correlation model has been proposed, according to which the phenotypic severity is inversely correlated to the residual activity of the protein.

Clinical trials currently ongoing all over the world on Stargardt disease patients are listed at clinicaltrials.gov.

The incidence of Stargardt disease is estimated in 1 on 8000–10,000 individuals. However, the healthy carrier frequency in the general population is estimated to be higher than expected from the incidence (ABCA4 mutation carriers are about 1:20).

Stargardt disease-1 (STGD1) is caused by homozygous or compound heterozygous mutation in the ABCA4 gene on chromosome 1p22. Over 1000 mutations in ABCA4 are now known to cause Stargardt disease. Most of the mutations are missense, which change the amino acid encoded by the protein. Nonsense, frameshift, splice and small insertions/deletions have also been identified. Large multi-exon deletions/duplications are reported in the literature, but are generally rare (old studies indicate a frequency between 0.3% and 2.2% of the chromosomes analyzed). The mutational spectrum of the ABCA4 gene differs consistently between different ethnic groups.

To date, only one pathogenic variant in ABCA4 is identified in a still significant number of patients (about 15-20%). There are several explanations for this possibility:

ABCA4 was first characterized in 1997 as the causal gene for Stargardt disease. Shortly thereafter several other phenotypes were associated with mutations in ABCA4, which now have collectively emerged as the most frequent cause of retinal degeneration phenotypes of Mendelian inheritance. Other ABCA4-associated phenotypes include: cone-rod dystrophy 3, retinitis pigmentosa 19 and age-related macular degeneration 2. Overall, ABCA4 mutations are estimated to account for 80% of all Stargardt disease cases (and for about 30% of all cone-rod dystrophy cases).

A clinical subtype of Stargardt disease-1, called juvenile macular degeneration, is caused by mutations in the CNGB3 gene. The term Stargardt disease 2 (STGD2) has been withdrawn because the genetic locus originally identified was found in error and later on remapped on the STGD3 locus.

A clinical prenatal diagnosis based on US examination is not possible. Molecular testing is possible only if the familial disease-causing mutation is known. Identification of ABCA4 retinopathies provides a specific molecular diagnosis and justifies a prompt introduction of simple precautions that may slow disease progression.

Best vitelliform macular dystrophy (BEST1 gene mutations) is a slowly progressive macular dystrophy with onset generally in childhood or teenage years. Decreased central visual acuity and metamorphopsia are typical, whereas patients retain normal peripheral vision and dark adaptation. In one patient with BEST1 mutations, a bull’s-eye maculopathy (which can be usually seen in cone-rod dystrophy, Stargardt disease and other maculopathies) was found.

Late-onset retinal degeneration (LORD, C1QTNF5 gene mutations) is an autosomal dominant disorder characterized by night blindness and punctate yellow-white deposits in the retinal fundus. However, the peripheral vision is also compromised in LORD and the onset is typically in the fifth to sixth decade.

Hypotrichosis with juvenile macular dystrophy (HJMD) is caused by homozygous mutation in the CDH3 gene. Patients do not show any other manifestations of ectodermal dysplasia. Cone-mediated as well as rod-mediated vision loss with slight peripheral retinal dystrophy can be seen.

Some patients with vitelliform macular dystrophy 3 (PRPH2 gene mutations) may be originally given a diagnosis of Stargardt disease.  Vitelliform macular dystrophy 3 is characterized by a solitary, oval, slightly elevated yellowish subretinal lesion of the fovea. However, the onset is usually later than in Stargardt disease, as it mainly occurs in the fourth or fifth decade of life with a protracted decrease of visual acuity and mild metamorphopsia.

Occult macular dystrophy can be easily differentiated from Stargardt disease by fundus examination, since the macula appears to be completely normal. However, age of onset, clinical symptoms and progression may vaguely recall Stargardt disease, especially because of reduced visual acuity and possible mild disturbances of color vision. Patients have severely reduced focal macular ERGs (whereas full-field ERGs are normal). Occult macular dystrophy patients are believed to have localized retinal dysfunction distal to the ganglion cells in the central retina. The disease shows autosomal dominant transmission and is caused by mutation in the RPIL1 gene.

In some patients with cone-rod dystrophy 7 (RIMS1 gene mutations, autosomal dominant inheritance), features highly suggestive of a Stargardt-like disease can be found. Cone-rod dystrophy (CORD) characteristically leads to early impairment of vision. An initial loss of color vision and of visual acuity is followed by nyctalopia (night blindness) and loss of peripheral visual fields.

In the past, it was highly recommended to perform a genetic test based on panels, given the high genetic heterogeneity and the presence of some overlapping traits with other ophthalmopathies of Stargardt’s disease. Panels based on clinical exome sequencing (6,000 genes; EXOME PANEL) open the possibility to explore mutations in any additional gene if the first panel is negative. Although this indication remains the gold standard, with the identification of more and more mutations that lie outside the coding regions of the ABCA4 gene (i.e., deep intronic, in the UTR, or in the promoter), it is becoming increasingly more necessary to perform sequencing based on the whole genome (GENOME PANEL). Large deletions/duplications may be initially inferred by appropriate calculations on sequencing data and later on confirmed by dedicated methods such as MLPA or qPCR.