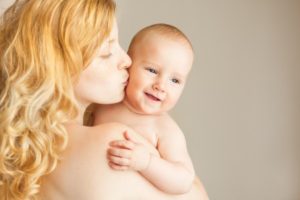 An unknown number of chromosomes

Only inherited by the mother

Mitochondrial DNA is almost exclusively of maternal origin, since spermatozoa contain very few mitochondria, whose contribution is completely negligible. For this reason, genetic disorders with mitochondrial inheritance can be only transmitted by the mother, and never by the father. Males and females can be equally affected, but only females can transmit the mutation to the offspring.

In normal conditions, mtDNA molecules are homoplasmic, that is they are all identical. However, when a mutation is present, it is often present in heteroplasmy, that is, only in some and not in all mitochondrial chromosomes. Usually, homoplasmy for a disease mutation could even be not viable. Individuals with a heteroplasmic mutation may be affected or healthy carriers. Indeed, the disease becomes clinically manifest only when the number of mutated mitochondrial chromosomes overcomes a specific threshold, called critical mutational load threshold.