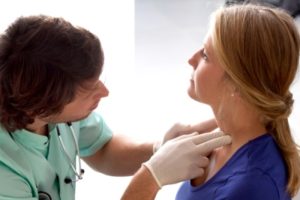 Non-Hodgkin lymphoma (NHL) is an immunological cancer developing from lymphocytes. It mainly manifests as painless surface lymph nodes swelling (neck, armpit, groin), but sometimes it can also occur in the digestive system, in the central nervous system, in the bone marrow or in the skin. Several histopathological subtypes exist, which can only be differentiated on the basis of biopsy results. However, substantial differentiation can be done in B-cell lymphomas and T-cell lymphomas.

Non-Hodgkin lymphoma can occur sporadically or in multiple members of the same family (familial form). In sporadic cases, it seems to be associated with advanced age and male sex. The existence of familial forms is documented by the publication of several studies regarding the recurrence of the disease through different generations of the same family tree. It seems that, in familial cases, the risk of developing the disease also spreads to other lymphoproliferative disorders. Indeed, families with recurrent Non-Hodgkin lymphoma have a high incidence of other tumoral forms of the lymphatic system.

To date, genetic mutations identified in familial Non-Hodgkin lymphoma are only somatic, with the exception of the gene PRF1. This means that the patient was not born with the mutation, but rather that the mutation arose in the tumoral tissue (somatic mutation). Genetic mutation could therefore represent a concurrent cause or even a consequence of the disease. Somatic mutations have been identified in the CASP10, ATM, RAD54L, BRAF, CARD11, TNFAIP3, TRAF2, EZH2, CREBBP, EP300, MLL2 and MEF2B genes. However, it’s important to highlight that these mutations represent a concurrent and not a prior finding to the tumor presence and therefore they can not be considered the cause of the disease. A possible genetic test to search for mutations in these genes would therefore have no diagnostic or predictive value and is therefore, in the current state of knowledge, not to be recommended.

As mentioned above, an exception is represented by mutations of the PRF1 gene, because they seem to be associated with an autosomal recessive form of non-Hodgkin lymphoma. It is important to highlight that mutations in the PRF1 gene have been identified only in 4 patients who, among others, also presented the clinical signs of the disease most typically associated with mutations in this gene: hemophagocytic lymphohistiocytosis. So, neither PRF1 genetic testing is recommended in patients with non-Hodgkin lymphoma who also do not show the signs of hemophagocytic lymphohistiocytosis.

In summary, it would perhaps be better to talk about a familial trait of susceptibility to the disease rather than a real familial form of non-Hodgkin lymphoma. This susceptibility almost certainly has a genetic basis. However, the study of family trees in which the disease recurs does not allow to identify a pure mendelian inheritance pattern and it is therefore likely that susceptibility.

One of the most important genetic disorders, that is part of the differential diagnosis for non-Hodgkin lymphoma, is the X-linked lymphoproliferative syndrome (XLP). Two types of XLP exist: XLP1, caused by mutations in the SH2D1A gene, and XLP2, caused by mutations in the XIAP gene. XLP1 can manifest with three different forms: (1) in the form of severe mononucleosis infection following infection with EBV or other viruses or in the form of hemophagocytic lymphohistiocytosis, (2) in the form of dysgammaglobuloinemia, (3) in the form of lymphoproliferative disease like, in fact, non-Hodgkin’s lymphoma. Indeed XLP1 is a clinically highly variable disease (some males even remain asymptomatic). The characteristic lymphomas of XLP1 often develop in childhood and can occur before EBV infection. In XLP2, however, lymphomas were not reported.

Non-Hodgkin lymphoma diagnosis is based on anamnesis (personal and familial history), on clinical exam (lymph nodes, liver and spleen palpation), on diagnostic imaging (ultrasounds, TAC, MRI) and, for the clinical and histopathological conclusive diagnosis, on the swelling biopsy. As mentioned above, since familial susceptibility for non-Hodgkin lymphoma does not follow a pure Mendelian inheritance pattern, it is not possible to perform any predictive genetic test. In the rare patients in whom there appears to be an autosomal recessive transmission in association with mutations of the PRF1 gene, typical features of hemophagocytic lymphohistiocytosis have actually been found.

Unfortunately, there are currently no techniques to prevent or predict the onset of non-Hodgkin’s lymphoma. In case of familiarity, however, it is advisable to inform the attending physician and to be directed to a specialized reference center.