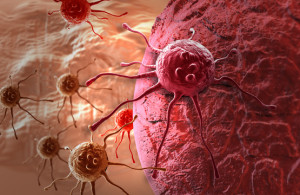 Heredity is mostly autosomal dominant, but also autosomal recessive transmission is possible in a minority of cases. Besides purely autosomally inherited colon cancer, in up to 25-30% of patients a positive family history for colorectal cancer suggests a hereditary component anyhow, likely in combination with environmental influences such as common exposures to risk factors. The altered genes involved in cancer onset are now well known. Almost all gene mutations known to cause a predisposition to colorectal cancer are inherited in an autosomal dominant fashion, although, there is at least one example of autosomal recessive inheritance, such as MUTYH-associated poliposis (MAP).

Lynch syndrome is caused by a germline pathogenic variant in a mismatch repair gene or by a germline deletion in EPCAM (which is not a mismatch repair gene). The syndromes associates with tumors exhibiting microsatellite instability (MSI). The risk is increased for both colon cancer and other cancers (endometrium, ovary, stomach, small intestine, hepatobiliary tract, urinary tract, brain, and skin). Mutations in MLH1 and MSH2 account for 90% of cases. Transmission is autosomal dominant, however, because of incomplete penetrance, variable age of cancer development and cancer risk reduction following prophylactic screening or surgery, not all individuals harbouring a pathogenic variant have a parent who had cancer.

Familial adenomatous polyposis (FAP) is caused by a heterozygous mutation of the tumor-suppressor gene APC. Mutational hotspots in this gene are located in the 5′ region of exon 15. Heredity is autosomal dominant, but 10-20% of cases are de novo. Attenuated FAP (AFAP) is a phenotypic variant of FAP characterized by a mild disease course, a reduced number of colorectal adenomas, later age of onset a and lower risk for colorectal cancer.

When the familial adenomatous polyposis phenotype is observed but no APC mutation is found or when the pedigree is evocative of autosomal recessive transmission, MUTYH-associated polyposis should suspected and the MUTYH gene should be analysed by sequencing and deletion/duplication testing (qPCR / MLPA). Colorectal cancer with the somatic KRAS mutation c.34G > T is also an indication to MUTYH gene testing. MUTYH testing is indicated even in cases of family history for colorectal cancer without polyposis. Two common MUTYH mutations (c.536A>G, p.Tyr179Cys and c.1187G>A, p.Gly396Asp) account for up to 70% of MUTYH-related conditions.

If both APC and MUTYH test negative, POLE and POLD1 gene sequencing should be considered.

Peutz-Jeghers syndrome (PJS) is an autosomal dominant hereditary condition characterized by the association of hamartomatous gastrointestinal polyposis, typical mucocutaneous pigmentation and cancer predisposition. Family history may be negative in up to half of the patients. STK11 gene mutations account for the vast majority of affected individuals (up to 94%).

Juvenile polyposis syndrome (JPS) is characterized by predisposition to specific hamartomatous polyps (“juvenile polyps”) in the stomach, small intestine, colon and rectum. Most juvenile polyps are benign and may cause anemia and bleeding. Malignant transformation of the gastrointestinal tract is mainly due to colon cancer but also gastric, upper GI tract and pancreatic cancer have been reported. Approximately 20 % of individuals have pathogenic variants in BMPR1A and 20 % in SMAD4. Most individuals with SMAD4 variants may present with a combined syndrome: JPS and hereditary hemorrhagic telangiectasia.

Hamartomatosis syndrome associated with PTEN (PTHS) (Cowden syndrome) is characterized by papillomatous muco-cutaneous lesions on the face and mouth, acral keratosis, macrocephaly, dysplastic gangliocytoma of the cerebellum, thyroid and breast lesions, gastrointestinal polyps or uterine leiomyomas. Patients are at increased risk of developing breast or thyroid cancers. Pathogenic mutations can be found in the PTEN gene and the transmission is autosomal dominant.

PLA2G2A: a germline mutation in the PLA2G2A gene was identified in a patient with colorectal cancer. Several other genes have been implicated as possible risk factors in population association studies. However, association studies can often be controversial because of population stratification bias, so that they results are difficult to be taken with confidence. With the evolution and spreading of whole exome and whole genome sequencing techniques more evidence will likely arise to confirm or finally exclude such preliminary associations.