From parent to child 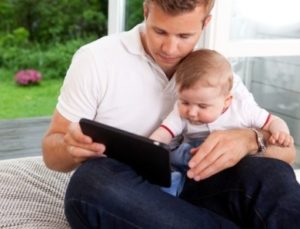 De novo mutations (i.e. arising for the first time in the embryo) and mutations due to parental germline mosaicism (condition in which one of the parents carries the disease mutation only in some of its germline cells, spermatozoa or egg cells) are typical of autosomal dominant disorders. In the case of a de novo mutation, the recurrence risk in the next pregnancies is much lower than the typical value of 50%. Indeed, in the case of de novo mutations, an empirical recurrence risk of about 5% is given. The risk is fixed at about 5% since it is not possible to establish for certain whether the mutation has really arisen de novo or it was present in a mosaic state in the gonads of one parent (germinal mosaicism is indeed impossible to test and must be presumed whenever an apparent de novo mutation is identified). Autosomal dominant disorders are often caused by gain of function mutation or mutations that cause haploinsufficiency.

It depends. First of all, only one of the two parents is affected. But not always. In the case of a de novo mutation or of parental germline mosaicism, neither parent is affected and the disease appears for the first time in the family. Another possible explanation for the fact that both parents are unaffected is incomplete penetrance, for which the disease may not be clinically evident in subjects with the mutation. Penetrance, which can vary from a disorder to another and which in some disorders substantially reaches 100% (such as in tuberous sclerosis), is most likely controlled by the action of epigenetic factors which modulate the pathogenic effect of the mutation. The subject carrying the mutation, even if clinically affected, can still transmit the mutation to the offspring.

2. Can an affected subject transmit the disease to the offspring?

Of course, with a recurrence risk of 50% at each conception and regardless of the sex of the unborn child. However, it should be remembered that some severe autosomal dominant disorders do not allow the patient to reach reproductive fitness, that is, the possibility to reproduce (let’s think to syndromes with severe mental retardation or with a very short life expectancy).

3. Can the disease manifest differently or with variable severity in different family members?

Often yes. Autosomal dominant genetic disorders are often characterized by both incomplete penetrance and variable expressivity (from a subject to another, also within the same family, always in the clinical spectrum of the disorder).

Yes. It should be remembered that the recurrence risk of 50%, in addition to being independent of the sex of the unborn child, is renewed at EVERY pregnancy.

5. Is it possible to make early prenatal diagnosis of an autosomal dominant disease?

Yes, if the diagnosis is confirmed and the mutation is known, having previously been identified in affected family members. However, it should be reminded that, since autosomal dominant disorders often occur in adulthood, prenatal diagnosis is not allowed for late-onset disorders for which the advantages of an early diagnosis are not demonstrable.

Yes, since it is not possible to know if a mutation is actually de novo or due to parental germline mosaicism, early prenatal diagnosis is also recommended in cases of a likely de novo mutation in the first child. Indeed, germline mosaicism confers an estimated empirical recurrence risk of about 5% at each pregnancy.

No, Mendelian inheritance is typical of genic disorders and not of chromosomal disorders. Large chromosomal aberrations (number or structural abnormalities), even when caused by the imbalance of a rearrangement of which one of the two parents is a carrier, never follow Mendelian inheritance (embryos with unbalanced chromosomes tend to be negatively selected during conception or in the early stages of pregnancy, significantly altering, but difficult to calculate, the chances of having an affected rather than healthy child).

8. Is mental retardation part of the clinical picture of autosomal dominant disorders?

Not always. Many autosomal dominant syndromes include mental retardation, but many others are compatible with an essentially normal (or not severely compromised) lifestyle.

9. Are there any treatments for autosomal dominant disorders?

Treatment availability for genetic disorders does not depend on the type of inheritance, but on the type of the disease, particularly on the severity, the progression and the underlying pathogenic mechanism (for some metabolic disorders, enzyme replacement treatment are available).

10. Is gene therapy a solution to autosomal dominant disorders?

As said, treatment availability for genetic disorders does not depend on the type of inheritance, but on the etiological and clinical features of the disease. Currently approved gene therapy protocols are very few.