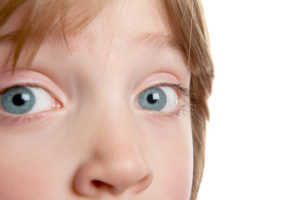 Distal arthrogryposis type 5 (DA5, also known as oculomelic amyoplasia) is caused by heterozygous mutation in the PIEZO2 gene, of which mutations also cause the overlapping syndromes DA3 and Marden-Walker syndrome. Distal arthrogryposis type 5 is distinguished from other forms of DA by the presence of ocular abnormalities, typically ptosis, ophthalmoplegia*, and/or strabismus, in addition to contractures of the skeletal muscles. Retinopathy can also be seen. Some cases have been reported to have pulmonary hypertension as a result of restrictive chest disease. Intelligence is reportedly normal.

Restrictive lung function and pulmonary hypertension attributed to chronic hypoxia have been documented in some cases and related to severe restrictive chest disease and alveolar hypoventilation.

MRI showed Dandy-Walker anomaly (which is actually more typical of Aase-Smith syndrome) in one patient.

DA5 is caused by heterozygous mutations in the PIEZO2 gene. The condition is autosomal dominant and several families with DA5 diagnosis in different members across multiple generations have been reported. Notably, a subtype of DA5, denoted as DA5D, is caused by heterozygous mutations in the ECEL1 gene. The terms DA5A, DA5B and DA5C were reserved to other putative DA5 subtypes, which some authors reportedly associated to mutations in MYH2, MYH13 and in a locus on chromosome 11 respectively. However, no supporting evidence regarding MYH2-, MYH13-, or chromosome 11-associated DA5 subtypes was provided by the authors, hence DA5D remains the only DA5 subtype officially recognized thus far.

Targeted mutation analysis can be done to detect known disease-causing mutations in PIEZO2 and ECEL1 genes. However, since arthrogryposes are genetically and clinically heterogeneous, full PIEZO2 and/or ECEL1 gene sequencing (EXOME GENE) or panel testing (EXOME PANEL) is recommended.

*As ocular movement abnormalities are not neurologic in origin, some authors dispute the use of this term.