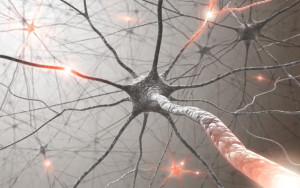 Amyotrophic lateral sclerosis (ALS) is a complex multifactorial neurodegenerative disorder characterized by progressive loss of upper motor neuron (UMN) and lower motor neuron (LMN), but it is increasingly recognized to be a more disseminated disease. Astrocytes, oligodendrocytes and microglia are also damaged in ALS. Clinical heterogeneity is typical of ALS (age and site of onset, disease duration) and there is no single test or procedure to establish the diagnosis of ALS. Most cases are diagnosed based on symptoms, physical signs, progression, electromyography (EMG), and tests to exclude the overlapping conditions. The prevalence of ALS is 1 to 3 every 100,000 newly diagnosed patients each year. Familial ALS (FALS) represents about 5 ~ 10 % of ALS cases, whereas the vast majority of patients are sporadic.

Peripheral nerve sonography (especially of the distal ulnar nerve) has been proposed as a biomarker to monitor disease progression in amyotrophic lateral sclerosis.

As abnormalities in membrane excitability and Na+ channel function are characteristic of amyotrophic lateral sclerosis (ALS), flecainide (which is a Na+ channel blocker and membrane stabilizer) has been tested in ALS patients. Flecainide was safe and potentially biologically effective in ALS, stabilizing the peripheral axonal membrane function. Patients with amyotrophic lateral sclerosis (ALS) may benefit from brain-computer interfaces (BCI).

Given the wide genetic heterogeneity and the limited ratio of genetic cases, unraveling genotype-phenotype correlations may be of help in identifying patients for genetic testing.

To date, more than 30 causative genes have been identified in hereditary ALS. The SOD1, C9orf72, FUS and TARDBP genes are the ones that are mutated in most patients. However, there are numerous genes in which pathogenic variants have been identified less frequently such as ALS2, ANG, ANXA11, ATXN2, CHCHD10, CHMP2B, CHGB, DCTN1, ERBB4, FIG4, HNRNPA1, KIF5A, MATR3, NEFH, NEK1, OPTN, PFN1, PRPH2, SETX, SIGMAR1, SPG11, SPG20, SQSTM1, TBK1, TUBA4A, UBQLN2, VAPB, VCP, and VEGFA. Elden et al. (2010) proposed that intermediate-length ATXN2 polyQ repeats might confer genetic risk for ALS (ALS13). Troyer syndrome (SPG20 gene), so far identified only in Old Older Amish population from Ohio, is characterized by distal amyotrophy together with spastic paraparesis, dysarthria, and short stature.

Most familial cases of ALS are inherited in an autosomal dominant fashion, but more rarely ALS can also be passed on through autosomal recessive inheritance. Moreover, there is a single example of dominant X-linked ALS due to UBQLN2 mutations. In this case, both males (hemizygotes) and females (heterozygotes) are affected, but males generally have more severe disease with an earlier onset than females.

In several cases of ALS incomplete penetrance is observed (i.e. an individual inherited a pathogenic mutation, but did not develop the pathogenic phenotype).

Nowadays, there is no definitive cure for ALS, but there are some drugs that can slow the progression of the disease. The two drugs approved by the United States Food and Drug Administration (FDA) to date are riluzole and edaravone.

Riluzole is a neuroprotective agent that may extend life expectancy of ALS patients of some months, without showing any effect on muscle strength and also extend the time before mechanical breathing support is needed.

Edaravone is an antioxidant agent that may slow disease progression as measured by the revised ALS functional rating scale.

Moreover, several other drugs are on testing in phase II or phase III clinical trials. One of interest is a clinical trial of phase III which tests the safety, tolerability, pharmacokinetics and clinical efficacy of an antisense oligonucleotide against SOD mutation in adults with ALS.

The differential diagnosis with non genetic conditions for this case might includes: polymyositis (proximal muscle weakness of shoulders, arms, and thighs, myalgias, and possible inflammation of the pharyngeal muscles), for which muscle biopsy is diagnostic, Guillain-Barré syndrome, and myasthenia gravis (in which onset with early or isolated oropharyngeal or limb weakness may rarely occur).